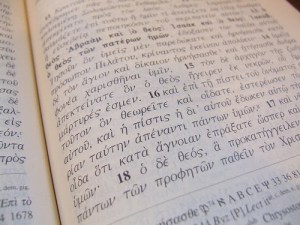 Continuing to consider the importance of expositional preaching for the church, we turn now to the preaching of books-as-wholes. This discipline, I fear, is not used widely in present day pulpits, though it appears to be making a comeback. It is lamentable that the preaching of whole books of scripture has fallen on hard times since, as I will argue, it is the best way to present the text in a way that is faithful to the form in which it was written and preserved.

The Bible is a collection of books the genres of which include epistolary, legal, prophetic, historical, narratival, apocalyptic, genealogical, psalmic, proverbial, and visionary literature, to name a few examples. When the triune God decided to reveal himself in written texts, he decided it would be best to do so in these various types of documents which we now commonly refer to as books. This is the form of scripture; it has come to us in books. Therefore, as preachers, we are most faithful to the form of scripture when we preach the books in their entirety. There are several reasons in favor of preaching whole books of the Bible.

First, the context of every verse of scripture is the book in which it is found, and every verse, if it is to be properly interpreted and applied, must be read in context. If we strip a verse from its context, then we have done an injustice to the text and have inclined ourselves toward the path of misinterpretation. It is unlikely that we will interpret a verse correctly and nearly impossible to plumb the depths of a passage when that passage is taken out of context. For example, in Philippians 2:19-30, Paul commends Timothy and Epaphroditus to the Philippians and outlines his plans for the two men to travel to Philippi. At first glance, the passage seems to be merely one of logistics, but when read in light of the argument, which begins in 1:27 with the command to live worthy of the gospel and runs all the way through 2:30, we see that Paul is appealing to the exemplary lives of Timothy and Epaphroditus and holding them up to the Philippians as worthy of imitation. The passage is not merely about travel plans; it is about the character of a life lived worthy of the gospel. The passage needs to be read in the context of the whole book in order to have the hortatory force that Paul intends.

Second, the preaching of books-as-wholes allows both preacher and congregation to soak themselves in the grammar, language, theology, and ethics of an entire book for an extended period of time. By the time the series is finished both have had ample time to come to grips with the message of the book in question and to reflect on its themes for an extended period of time. The words of scripture are profound and significant, and they are worthy of our extended attention.

Third, both Old and New Testaments offer precedent for the discipline of taking books-as-wholes. In Exodus 19:7, at the foot of Mt. Sinai, Moses set before the elders all the words that the Lord commanded. In Exodus 34:32, Moses spoke all that the Lord commanded to all the Israelites. In 2 Chronicles 34, Josiah commissioned the repair of the house of the Lord. During the course of this project, the book of the Law was found. When it was read to King Josiah, he tore his clothes and acknowledged the wrath of the Lord on the nation because their ancestors did not keep all that is written in the Law (19-21). In Nehemiah 8, the priest Ezra took the Law and read to to the whole assembly. These are only a few of the places where the whole Law was read to the people. The New Testament provides precedent as well. In Acts 20, Paul assembled the Ephesian elders and recounted his ministry to them saying, “I did not shrink from declaring to you the whole counsel of God” (27). Apparently, Paul thought it important to include the entirety of God’s message in his ministry of proclamation.

It is for these reasons that I advocate the preaching of whole books of scripture. A ministry characterized by the long term preaching of books-as-wholes across the gamut of biblical genres will yield a church that is thoroughly exposed to the God revealed in the Christian scriptures. In the end, God gave us a collection of books. He did not give us a collection of how-to manuals. That is not to discredit a preaching series on marriage, discipleship, salvation or any other biblical topic, but I would make these secondary and supplemental to a strong diet of preaching whole books of scripture. When we give an account of our preaching ministry to the very One we proclaim, let us be able to say with Paul that we did not shrink from declaring the whole counsel of God.

One thought on “Why I Preach Expositionally, part 3: The Case for Preaching Whole Books”