One thing is certain: Rob Bell has gotten Evangelicals talking about Hell and the question of universal salvation. As I watch the exchange of blows over his new book Love Wins: A Book About Heaven, Hell, and the Fate of Every Person who Ever Lived, I’ve had opportunity to reflect once again on why, as much as I’d like to, I cannot commit to Universalism.
I originally wrote a post called: “What Rob Bell and John Piper Might Have in Common.” But after reading some quotes from Bell’s already-controversial-even-though-it-hasn’t-been-published-yet book which indicate that he may not be so universalist as everyone might have thought, I couldn’t in good conscience write a post on what Piper and Bell might have in common were Bell to wind up a universalist. But I bet I’ve got you wondering, though. So, now the question is: What does John Piper have in common with a Universalist? And the answer to that question will make clear why my Wesleyan theology precludes a commitment to Universalism. 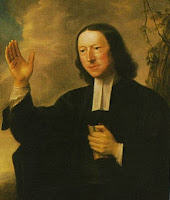 Everyone familiar with Calvinism understands that in that system grace is understood to be irresistible. That is, grace overcomes human resistance and saves us. Those chosen by God to be saved will be saved because his grace will overwhelm them and bring them necessarily to salvation. Here’s the thing: all that is true of Universalism as well. Universalists believe that God will ultimately save everyone. That means that the possibility cannot exist that someone might hold out indefinitely in resistance against God’s saving grace. God must eventually overcome the resistance of all people bringing them irresistibly and necessarily to salvation. Universalism commits one to a Calvinistic understanding of grace. As much as I would hope for God to save all people, this is a major reason why I don’t subscribe to universalism. As a Wesleyan-Arminian, I believe scripture teaches that grace is resistible, which means that someone could potentially hold out and resist God’s grace forever, which means that I can’t really believe in universal salvation. Thus, Universalism is inconsistent with a Wesleyan-Arminian theology of grace.
The difference between a historic Calvinist, like Piper, and a Universalistic Calvinist, like George MacDonald, is over the scope of salvation not the character of salvation. The Universalist believes that irresistible grace is applied to all with equity; the historic Calvinist believes that grace is applied particularly to some. For the Universalist, everyone is elect; for the historic Calvinist, only some are. Either way, a Wesleyan-Arminian concept of freedom, and thus the potential for an authentic relationship between God and a human being, has gone straight out the window.
Wesleyan-Arminians believe that, for an authentic relationship to exist, both parties must be able to say “no.” I don’t know whether Bell would label himself  Wesleyan or Arminian, but this quote from the book suggests that he has a similar view of an authentic relationship:

“… In speaking of the expansive, extraordinary, infinite love of God there is always the danger of neglecting the very real consequences of God’s love. Namely God’s desire and intention to see things become everything they were intended to be. For this to unfold, God must say about a number of acts and to those who would continue to do them ‘Not here you won’t.’

Love demands freedom. We are free to resist, reject, and rebel against God’s ways for us. We can have all the hell we want.”

If you believe that grace is resistible and that love demands freedom, then you can’t really be a Universalist. I think this is probably why Bell says what he says here (but I’ll have to read the book for the whole story), because someone who believes that an authentic relationship of love requires the freedom to say “no” cannot affirm that God will absolutely save everyone. This would necessarily require coercion, an overriding of the freedom to say “no”, and that wouldn’t be an authentic relationship, and love certainly would not win.
So, can a Universalist be a Calvinist? Necessarily! Can a Wesleyan be a Universalist? Not if he values consistency.

14 thoughts on “Can a Wesleyan Be a Universalist?”