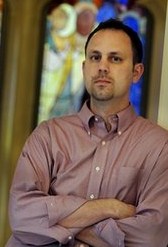 Earlier this week, I offered some reflections on the reports that United Methodist pastor and student at Duke Divinity School, Chad Holtz, had been dismissed from his pulpit for his controversial views on, among other things, hell. It has now come to my attention that Holtz was not removed from his pulpit; he left willingly and on his own.
The North Carolina Conference of the United Methodist Church released a statement explaining that Holtz was asked to leave his role as pastor after breaking an agreement with Marrow’s Chapel that he would not post on controversial topics. Holtz’s District Superintendent commented on the Holtz’s decision to leave saying: “Both Chad and the committee agreed that he would not post controversial topics online. He broke the agreement and the committee members felt betrayed. The committee asked Holtz to leave the church and he agreed.”
This adds a number of interesting elements to the discussion, not least the integrity (or lack thereof?) of the journalists who made the initial report either without all the information or purposefully leaving it out. I’ll be curious to see whether those news agencies will correct their erroneous reporting.
Beyond that, how does this affect the role and responsibility of the pastor to speak biblically and prophetically on issues on which others may disagree? Elders in the United Methodist Church are charged with the ministry of the Word, and oftentimes that ministry challenges those who hear, indeed it challenges those who preach, to grow and rethink some things we’ve held onto for a long time. I know I’ve had to change my mind on some tough issues after seeing the biblical evidence in a fresh way. I’m in no way suggesting that Holtz was right to break his agreement; he shouldn’t have. But we need to ask: how will the denomination ensure that the prophetic office of the pastor is protected and preserved? Would this situation have been handled differently if the pastor has been an ordained elder rather than a licensed student pastor?
________
Image Source: Associated Press