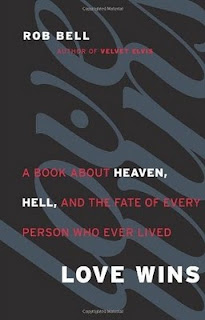 Let me say up front that this is not my typical book review. Reviews of Love Wins are available aplenty, and if I were to try to deal comprehensively with Rob Bell’s new book, it would require more time than I presently desire to devote. So, that said, here are a few reflections on the book, a few thoughts on what I like and what causes me concern. My goal is not simply to repeat all over again what has already been said,  though I will certainly echo other reviewers, but to offer a few points that I hope will contribute to the larger post-publication analysis of a volume that has drawn a lot of attention.
Let me begin with what I like about Love Wins. I really appreciate Bell’s call to embrace a much larger biblical vision of redemption than is often communicated in the truncated better-hope-you-escape-this-world-and-go-to-heaven-when-you-die message. I absolutely affirm that when a believer dies they are “with Christ which is far better” (Phil 1:23), and I’m happy to call that Heaven, but I am deeply concerned when that is portrayed as the goal of the Christian life and the aim of God’s purposes in creation. Scripture speaks of a day when all creation will be liberated from bondage to decay (Rom 8:21), when the Savior from Heaven returns to subject all things to himself (Phil 3:21-22), when the dead will be raised never to die again (1 Cor 15:20-26), and when God himself will make his home among his people in a newly recreated heaven on earth (Rev 21:3). Bell has a vision of this new creation, and I appreciate his rejection of the absolutely unbiblical idea that creation is a sinking ship just waiting to be abandoned. Salvation is cosmic. That’s what the Bible says, and Bell gets that right.
Despite this significant positive for the Bell book, there are also problems, and perhaps the most important is his exegetical method or, I should say, the absence of any serious exegetical method. Two examples will make the point.
First, in dealing with the phrase “aion of koladzo” (as Bell phrases it, 91), which is usually translated something like: “eternal punishment,” Bell concludes that it should be translated as: “a period of pruning”, “a time of trimming”, or “an intense experience of correction.” He authoritatively asserts these translations providing no detailed interaction with the biblical text, no consideration of the context, which ought to include an analysis of structural relationships within the text that help us get at the meaning of terms, and no citations of ancient sources that support his proposed translations. He doesn’t even cite a lexicon (which still isn’t exegesis but would have, at least, been something) to justify his preferred revisionist translation. For all the reader knows, he is just making it up as he goes along, and that’s kind of the way it looks. The point I want to make is that Bell attempts to overthrow a generally and widely accepted translation and provides absolutely no exegetical evidence as to why his view is to be preferred. Every first year seminary student knows that context is everything. Evidently Bell forgot that lesson when he sat down to write Love Wins.
Second, Bell takes the well-known quote from Jesus in John 14:6, “I am the way and the truth and the life. No one comes to the Father except through me,” and goes on to conclude that “What he (Jesus) doesn’t say is how, or when, or in what manner the mechanism functions that gets people to God through him” (154). Again, the problem is that there is no argument from the larger book-of-John-as-a-whole context that legitimately allows this conclusion. Bell doesn’t make an argument from John; he simply doesn’t provide a reading of John. If he were to read John, he might very well find evidence that contradicts his assertion. I was a grading assistant in grad school, and if one of my students had turned in something like this, I would have recommended a failing grade. This sort of stuff would be a laughingstock in the real world of serious biblical interpretation, a laughingstock.
The thing that bothers me the most about this glaring methodological deficiency is that Bell should know better. And if he does know better, then he should do better; if he doesn’t know better, he shouldn’t be publishing books. The reality is that most of the people who will read this book will not have had the technical training to know what is being done to them. They will simply know that this guy is pastor, and that he should, therefore, know what he’s doing when he discusses the Bible. When people who know the rules don’t play by the rules when they write for people who don’t know the rules, they are taking advantage of their influence, abusing their power, and, I would say, abusing their readers. Some will say that these are harsh words, but I believe they are adequate, accurate, and spoken out of love for those who are the object of this shenanigan posing as biblical interpretation. Indeed, what Bell has done is unfair, unjust, and deceitful, and, when you treat people like that, love certainly has not won.

Well, I had originally intended to go on and discuss some other aspects of Love Wins, including whether or not some of the conclusions are consistent and the understanding of God that is developed in its pages. But this post has already become far too long. So, keep an eye out later this week for some thoughts on those topics. At this point, the problems are more severe than the benefits are redeeming; we will see if things get better.
_____
Thoughts on Love Wins – Part 2
Thoughts on Love Wins – Part 3