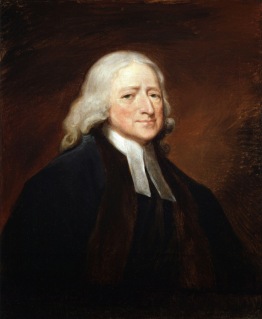 The New Testament does not explicitly define any required mode for Christian baptism. As a follow up to last week’s post on Wesley’s argument that Christ’s baptism was probably not by immersion, here’s an excerpt from the same treatise arguing for the probability that baptism in the New Testament was by pouring or sprinkling:

And as there is no clear proof of dipping in Scripture, so there is very probable proof of the contrary. It is highly probable, the Apostles themselves baptized great numbers, not by dipping, but by washing, sprinkling, or pouring water. This clearly represented the cleansing from sin, which is figured by baptism. And the quantity of water used was not material; no more than the quantity of bread and wine in the Lord’s supper. The jailer “and all his house were baptized” in the prison; Cornelius with his friends, (and so several households,) at home. Now, is it likely, that all these had ponds or rivers, in or near their houses, sufficient to plunge them all? Every unprejudiced person must allow, the contrary is far more probable. Again: Three thousand at one time, and five thousand at another, were converted and baptized by St. Peter at Jerusalem; where they had none but the gentle waters of Siloam, according to the observations of Mr. Fuller: “There were no water-mills in Jerusalem, because there was no stream large enough to drive them.” The place, therefore, as well as the number, makes it highly probable that all these were baptized by sprinkling or pouring, and not by immersion. To sum up all, the manner of baptizing (whether by dipping or sprinkling) is not determined in Scripture. There is no command for one rather than the other. There is no example from which we can conclude for dipping rather than sprinkling. There are probable examples of both; and both are equally contained in the natural meaning of the word (Works of John Wesley, Jackson ed., 10.189-190).

Two observations here. First, archaeologists have discovered pools known as mikva’ot (singular, mikveh) in Jerusalem which were used for ritual washing. These pools were yet to be discovered in Wesley’s day; so he wouldn’t have known of them as such. Nevertheless, as Wesley observes with regard to the pool of Siloam (probably a mikveh), its difficult to imagine thousands of people being immersed in a single day in a small pool. (cf. Acts 2:41). And the presence of a few such pools only demonstrates that a means by which some people might have been by baptized by immersion was available. It doesn’t demonstrate that anyone was actually baptized by immersion. Other evidence is needed in order to reach any conclusion with regard to the baptismal practices of first century Christ followers.
Second, Wesley mentions that sprinkling is an appropriate image of baptismal cleansing from sin. One New Testament text in which sprinkling is used alongside baptismal imagery is Hebrews 10:22, which speaks of having, “our hearts sprinkled clean from an evil conscience and our bodies washed with pure water.” This is not, of course, an explicit statement that sprinkling is an authorized mode of baptism, but you do have the cleansing of the heart by sprinkling set alongside the washing of the body with water. At the very least, sprinkling is here associated with Christian ritual washing.
Wesley’s last statement that the word “baptize” equally contains the sense of immersion or sprinkling is still a topic of debate. Perhaps we’ll take that up in the next post.